Scale insects are common tree pests that swarm trees and cause serious damage. Senske can remove scale insects as part of our tree service program.

Nothing diminishes the beauty of trees in your yard more than noticing the large amounts of unattractive bumps found on the leaves and branches. There are many factors that can be attributed to what is causing these conditions to occur in your trees and shrubs, and one such culprit is that you have an infestation of scale insects. 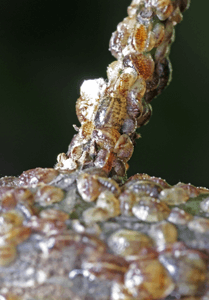 Although the two types of scale insects are small and would seem to cause only minor damage, they both contain large pointy, needle-like mouth parts that are up to eight times the length of their body. These scale insects then insert these mouth parts into tree leaves and limbs, feeding on the tree sap, and when untreated, the continued feeding directly hampers the growth of the tree.

Scale insects can also produce a sticky sap, called “honeydew,” that can create a great environment for fungus to grow and adds further damage to trees and shrubs. Scale insects also kill twigs, branches, resulting in severe damage to an otherwise healthy tree.

Scale insects are mostly dormant over winter, with the unfertilized females begin laying eggs in the spring. These eggs hatch as small legged scale insects who then migrate to a good place to feed, losing their legs soon after while developing their waxy shell. The male scale insects, over time, develop wings that they use to travel from area to area in finding females to fertilize.

In our areas of service, the best time to control scale insects is during the insect’s dormant period with the use of a dormant spray, or when they are crawlers usually in early to mid-summer and looking to reproduce. The most effective application is generally a dormant spray between November and March, preferably February and March. During the mobile crawler stage in early summer, June and July, scale insects can be susceptible to insect-controlling products. Some scale insects can also be controlled with systemic products, but results are not easy to determine.

If you are worried about the problems that Scale Insects may cause your trees and shrubs, contact us today at (877) 944-4007 or click to receive a FREE estimate. Allow our professionals to take the headache out of dealing with these annoying insects and protect your tree and shrub investments. Do you have a tree pest problem? Talk to a Senske arborist about our holistic tree service.

Soft scale insects attach themselves to tree leaves and branches through large mouth parts, at times up to eight times bigger than their bodies, and feed on the nutrients that trees needs to grow. The results can cause tree growth to be hampered. Also, soft scale insects can produce “honeydew”, a sticky substance on the bottom of tree leaves that is an ideal place for tree fungus, such as black mold, to grow.

Soft scale insects are best treated in the spring with a dormant spray.

Contact us today at (877) 944-4007or click for a FREE Estimate. Our professional technicians ​will ensure your trees are taken care of while getting rid of soft scale insects. Do you have a tree pest problem? Let Senske arborists help you get rid of scale insects as part of our complete tree service program.

Armored scale insects are small bugs that attach themselves to leaves and branches of trees. While armored scale insects are attached, they insert their large needle-like mouth parts, sometimes as long as eight times the length of their body, and feed on the tree sap. Similar to aphids, during feeding is when these insects cause the most damage to the growth of the trees and shrubs. They also secrete a sticky material called “honeydew”, resulting in additional harm to the tree through the growth of fungus.

How to Get Rid of Scale Insects

If you are worried that your trees have been invaded by these or any other scale insect, contact us today at (877) 944-4007or click to request a FREE Estimate. Allow our experts to apply their years of expertise to deal with your scale insect problem quickly and professionally the first time.